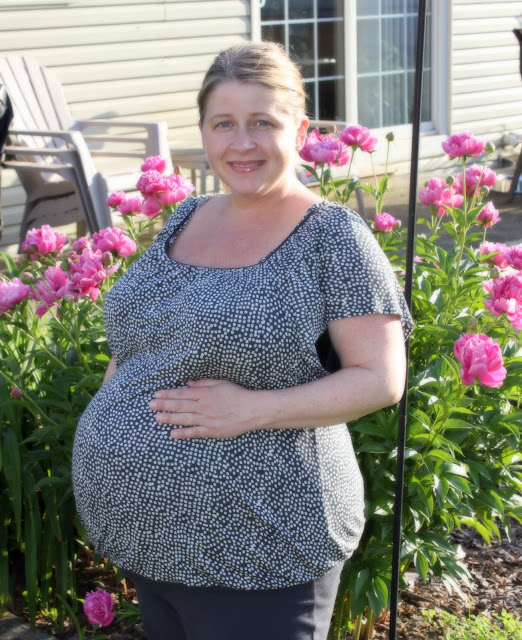 How Far Along am I: 39 Weeks
Size of baby: Baby Girl is the size of a watermelon

Maternity Clothes: yes, thank goodness
Gender: It’s a GIRL!
Movement: She is moving around mostly in the mornings after breakfast and then randomly throughout the day. Once I lay on the couch for the evening she normally gets her moves going again and then settles down for the night.
Sleep:I am tossing and turning alot these days, it literally feels like I am carrying a watermelon when I flip over at night. And my back has begun to get a little achy in the mornings.
What I miss:This week I would have to say shorts or capris. Its been in the 90’s here most of the time and the best summer clothing I have are yoga capris. And they aren’t very breathable but they are much better than jeans or yoga pants.
Cravings: I’ve been wanting hot fudge sundaes….more specifically peanut buster parfaits.
Yum. Chocolate and Spanish peanuts.

Symptoms: I mentioned the swelling, it continues, especially in this heat. And for some reason when I get up at night it seems like my right heel is broken…lots of pain in that foot.

Measurements: Zero Dilation and effacement. We had an ultrasound on Tuesday and they are estimating Grace to be at 8 lbs and 5 ounces right now!
Her abdomen is measuring about 2 wks ahead and her head and femur are about a week behind.
So looks like we’ve got a little fluffy baby on our hands!

Best Moment this week: It has been a pretty good week overall.  Had 2 contractions last night, about half an hour apart, so nothing to call anyone about, but at least its the start of something.
We go back to the doctor on Monday and see how things are coming along.
Can’t believe we are just one week away from the due date!